The Toy Fox Terrier has just pressed your doorbell. This little fellow is a direct relative of the Fox Terrier, but its physical structures vary. Experts regard it as a separate breed.

This dog is athletic and lithe. It has a white coat with black marks. Elegant and graceful, it has V-shaped ears and wary, wide eyes. The coat requires little care, though brushing may be necessary. It dislikes cold weather, so do have a set of dog sweaters in store.

Here’s an introduction video of the Toy Fox Terrier:

Like many other toy breeds, the Toy Fox may be prone to health conditions like Patella Luxation. It may also develop Von Willebrand’s disease, a blood clotting disorder that results from a deficiency of the Von Willebrand factor, an essential protein.

The Toy Fox Terrier will adapt to apartment life, but note that it loves to run. Daily walks are necessary. This dog does not bark much if you bond with it and train it well.

You will not be able to mistake the West Highland White Terrier, or Westie. This Scottish native is renowned for its cuteness and has a strong personality to boot. 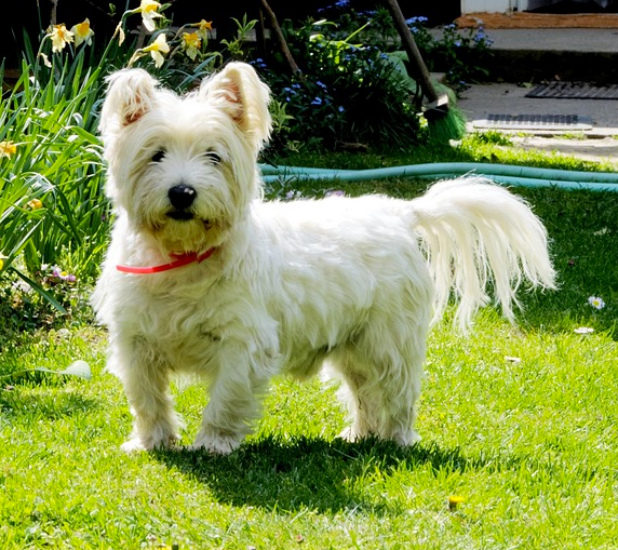 The Westy was the brainchild of various terrier programs begun by Edward Donald Malcolm, the 16th Liard of Poltaloch. Breeders used it for rat baiting and as a companion dog.

Typically, Westies have expressive, almond-shaped eyes. This dog has a sunken chest. It has a rough white outer coat and a soft undercoat that requires regular grooming using the “hand-stripping” technique. This grooming technique involves using a stripping knife to cut the top coat short, leaving tufts of hair along its sides.

Here’s what you need to know about West Highland White Terrier:

Westies are predisposed to the “westie jaw,” a recessive gene that may cause deformed bones in the jaw. It is prone to skin conditions as well.

The Westie temperament varies from one dog to another. Some prefer solitude and independence, while others are well-socialized and friendly. It has a high prey drive, so do keep your small pets away from it and give it a ball to play with instead.

The Westie will find a home in your apartment but do take it out for daily walks.

This ancient Greek breed of dog is both tiny and rare. It will fit anywhere in your apartment.

Experts believe that the Alopekis is one of the earliest dog breeds to emerge in Europe, having arrived even earlier than the Spitz. It was primarily a marshland dog.

The name “Alopekis” means “small fox,” or “fox-like,” and it is not hard to see why the ancient Greeks awarded it to this dog. It resembles a little fox and has a coat that comes in many colors. It has a short, hard undercoat.

Here are some Alopekis in Action:

This healthy little dog thrives in any environment and is not a fussy eater.It is hardy and does not have any known weaknesses.

This fellow is affectionate, devoted and calm. It is not a yappy dog, but a useful little worker that will help you haul your groceries in a cart. The Alopekis can also go long distances, so you will be able to travel anywhere with it.

The Alopekis is a capable watchdog and will keep your apartment safe.

The Cairn will be the oldest, friskiest dog in your apartment block. 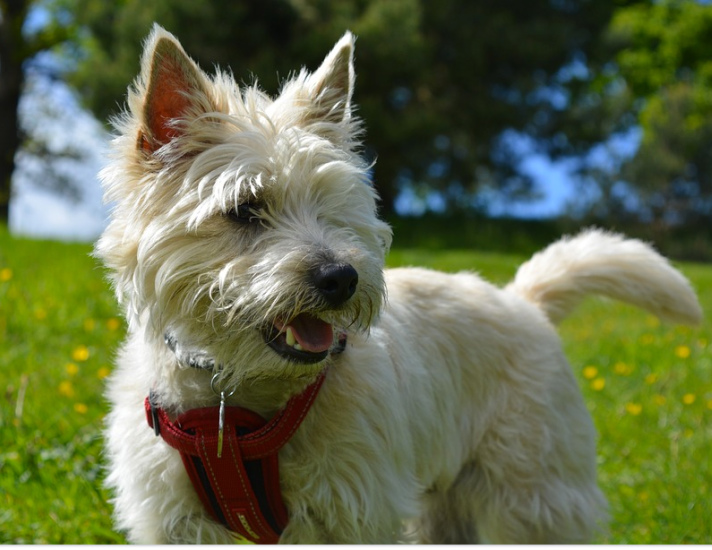 This sturdy little fellow is the earliest working dog in Scotland. Owners used it to chase rats and hunt game. It was originally part of the Skye Terrier group, but Skye Terrier proponents regarded it as a separate class of dog.

The Cairn has a rough, tan or brown outer coat that needs grooming, in particular, hand stripping to remove dead hair. This technique allows new growth and protects the dog from dirt.

Here is a video about Cairn Terriers:

It is a healthy dog, but prone to conditions such as dysplasia and patella luxation. Older Cairns may develop cataracts, just as humans may.

The Cairn, being the most experienced of all the terrier breeds, has the typical terrier personality. It is usually the leader of the pack and voices its opinions whenever it feels displeased.

That said, it adapts well to apartment life. Note, however, that an active little dog like this needs regular exercise and a daily walk.

The “dwarf dog, or Pembroke Welsh Corgi, is another dog that could complete your apartment. It originates in Pembroke, Wales. 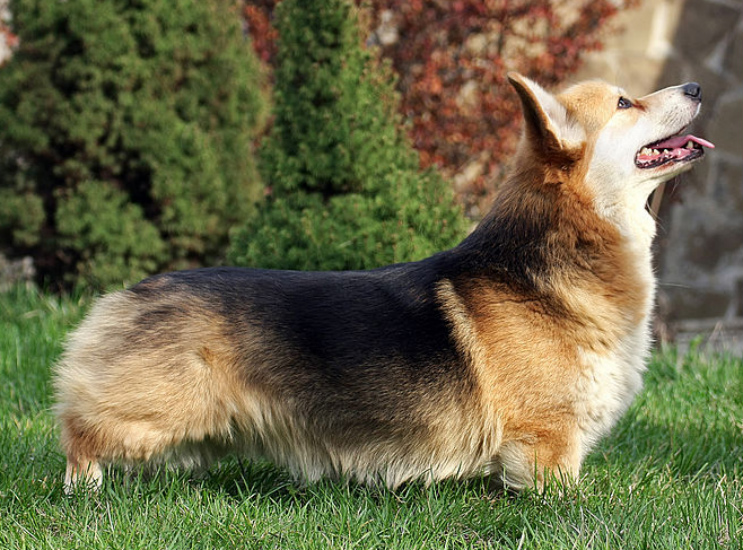 You can never mistake a Pembroke Corgi. This Spitz-type dog has a standout, long canine body, and erect ears. It is fox-like and has a tan or tan-black coat that sheds. It may have a docked tail.

A Corgi is prone to ‘fluffies” or a coat that is too long. It may also develop the “blues,” which are not erratic mood swings, but a dilute coat color. Its lack of height makes it prone to monorchidism or the lack of a testicle. Being a small dog, it may develop hip dysplasia or dislocation.

Here is a video on Pembroke Welsh Corgi:

A Corgi is a gentle, affectionate dogs that stick closely to their owners. It is highly trainable and number 11 on Stanley Cohen’s list of intelligent dogs. It behaves well around people but does have a herding instinct that may make it domineering. In all, it will do well in an apartment.

Welcome the Schipperke, a Belgian native, into your home. The Schipperke originated in Belgium in the 16th century and is a member of the Spitz family. Owners used it as a herding dog.

The name Schipperke means “little Shepherd.” During World War 2, it ran messages for the Belgian resistance.

Like other Spitzes, it has erect, pointed ears, and has a black, double coat that needs simple grooming. The outer hairs have a coarser feel than the softer, inner ones.

This dog has no health problems to speak of but may develop joint problems as it ages. It may have luxating patellas as well.

The Schipperke has a reputation for being willful and mischievous. Due to its herding instinct, it may chase your pet rabbit. It is curious and wants to have a part in everything. Note that it tends to have a will of its own, and may debate listening to you if your instructions do not benefit it.

In all, it will do well in your apartment but does need regular exercise.

There is room for the resilient Skye in your apartment if you can find it. This terrier is one of the most endangered in Britain, according to the kennel club.

This dog developed around the West Coast of Scotland, around the 16th century. It was popular in Scottish high society, and in America as well.

The Skye has a rough, straight topcoat and a soft undercoat. Its standout feature is the short hair on its forehead, which covers its eyes. It can come in any Seif color.

Here is a video on the history of the Skye Terrier:

A Skye needs regular exercise, but not too often to avoid damaging its bones. Do not let your young Skye jump about too often. This dog is also prone to degenerative disk disease. Female Skyes may develop mammary cancer.

It is a hunting dog and loves daily walks. It will also enjoy life in your apartment, but like all terriers can be given to dominance and mischief.

You can introduce this Welsh native into your apartment. The Sealyham is Welsh terrier that began as a working dog. This breed, like its cousin the Skye, is rather rare.

The Sealyham is a terrier with a strong jaw. It has a white double coat that you must brush regularly. The markings on its face can be in many colors. As it is a tiny dog, it can get dirty, so regular bathing is necessary.

The Sealyham has few health problems. It may suffer from a dislocated lens that may cause Glaucoma and eventual blindness.

A Sealyham has an independent spirit but is happy in the company of other dogs. Like other terriers, this dog can be stubborn, domineering and opinionated. It will take to your apartment, but does require regular exercise.

The little Dandie Dinmont, as its name suggests, is a dandy little fellow that you can welcome into your apartment at any time. It hails from Scotland.

This Scottish cutie comes from the borders of Scotland. Like many other terriers, its owners bred it to hunt small game. Many experts believe that its original breeders were the Allans from Holystone, Northumberland, who developed it in the 1700s. Many thought it to be a cross between a Skye and Border Terrier.

Here is a video that showcases Tammy the intelligent Dandie:

The Dandie has a long body and short legs. It is low to the ground. This dog has a muscular neck because it used to retrieve game. It has a pepper or mustard silky coat, which ends in a topknot on its head.

Its long body makes it prone to health issues like intervertebral disease and spinal disc herniation. It may also be prone to liver-related diseases like Cushing’s Disease.

The Dandie is usually a friendly dog, and the most obedient of the terrier group, making it a dog suited to close-quartered apartment living. However, do keep it away from your small pets.

The Norfolk terrier knocks. This little has Norwich Terrier relatives. These two dog breeds are the smallest of the working terriers. 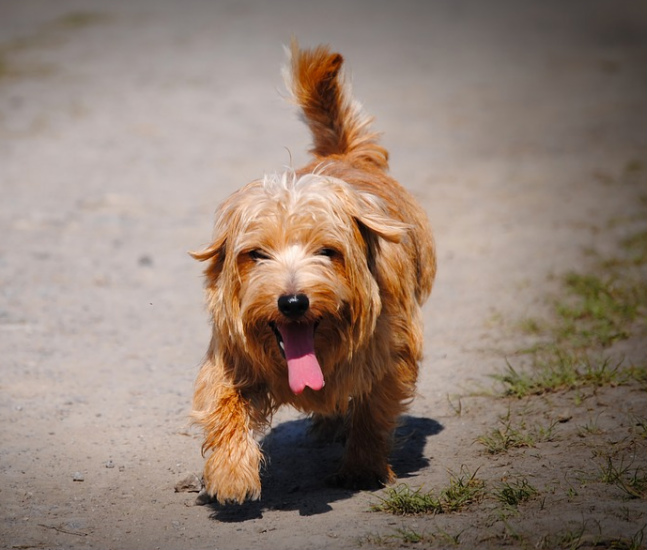 Norfolk terriers were, at first, barn dogs that rid farms of vermin. Farmers used them to scare predators, some of which equaled them in size. The Norfolk worked in packs and took turns with other dogs to scare prey. It became known for being fearless.

Here is a video from AKC talking about Norfolk terriers:

The Norfolk has a wiry double coat that comes in red, black, tan, grizzle or wheaten, and needs stripping every few months. It can play with asthmatic children because of its hypoallergenic coat.

It is a tiny dog, According to breed standards, its ribs should be sturdy. This dog should have cropped ears as well.

A Norfolk may develop hip dysplasia, owing to its small hip sockets. Its lifespan is about 14 years.

Having an independent streak, it dislikes but will tolerate cuddling. It is fearless, so do watch out for rash actions. It socializes well with people and other pets, which makes it a valued apartment companion.