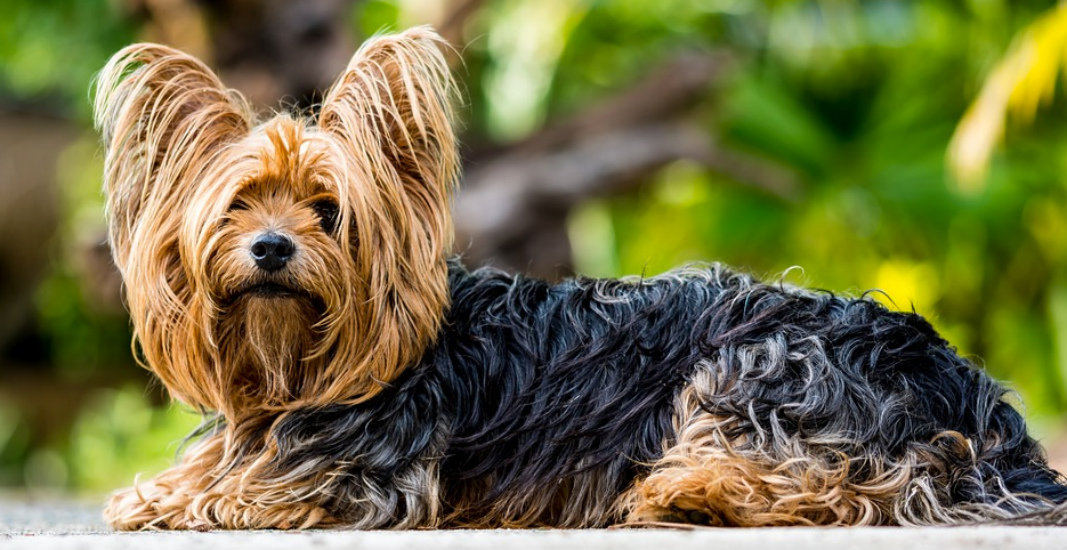 Owners bred this spunky fellow for catching rats in clothing mills. This dog started developing when Scottish workers arrived in Yorkshire searching for jobs, bringing with them several small terriers. The earliest example of a Yorkie was Huddersfield Ben, a male dog which became a show dog winner.

The Yorkie should have an outstanding coat. The hair should be soft, shiny and silky. It should be long, parted in the center but facilitate the dog’s movements. Many experts regard it as being hypoallergenic.

Here is a video about Yorkshire Terrier:

A Yorkie tends to develop bronchitis and cataracts. It may have a delicate digestive system and be prone to allergies. Like other small dogs, it may have make or baby teeth that do not fall out as its adult teeth grow. A Yorkie may develop a weak trachea, leading to breathing problems.

A Yorkie has a regal bearing and conveys a sense of importance. It is an active dog and tends to be over protective of its owner. Note that it may become irritated with small children who tease it or hug it too much. This royal canine will thrive in a small apartment.

The Lancashire Heeler’s job, as its name might tell you, is to get sheep to come to heel. This dog hails from Lancashire County, England.

The Lancashire Heeler’s precise origin remains ambiguous, but experts suggest that it is a cross between a Welsh Corgi, a herding dog from Wales, and the Manchester Terrier from Ormskirk. Owners used it for herding and as a general purpose farm dog.

This dog has a coarse liver or tan outer coat with a fine undercoat that you should keep dry. It may have a mane around its neck. Being a short-haired dog, it requires minimal grooming.

Take a look at some of the most beautiful Lancashire Heelers below:

In all, the Lancashire Heeler will be a fun roommate. Playful, energetic and vigorous, it can carry a load about its size. Get it to haul your groceries for you.

If you are unafraid of nosiness, then welcome one of the most alert dogs in your apartment block. The Portuguese Podengo Pequeno is here to poke its nose into everything you do.

The Portuguese used the Podengo Pequeno for hunting game. It is not well-known beyond Portugal. As such, it is a rare breed. The big Podengo hunted wild boar, while the medium sized one searched for rabbits. It had a knack for jumping on prey and flushing it out.

The Podengo has a rough outer coat and an undercoat. It may be wiry, or short-haired. It does not need much grooming and dries fast. The hairs come in tan, brown and white colors. You will know the Podengo Pequeno by its wedged head and a curved tail.

The Podengo Pequeno has a friendly nature and makes a quiet, intelligent apartment companion. That said, it needs regular exercise. It is watchful and will keep your apartment safe.

Meet the Volpino Italiano, a passionate, furry friend. This Spitz, as you can tell, is an Italian native.

Spitz-type dogs existed throughout the ancient world. Archaeologists found specimens preserved in European peat bogs. They were the favorites of Ancient Greeks, and a little later, Romans as well. The great Italian artist Michelangelo owned one of these Spitzes. Kennel clubs finally recognized it as a breed in 1903.

Here’s one Volpino playing with a ball:

The Volpino, like all other Spitzes, has pointed, erect ears. It has a rough, outer white coat and a soft undercoat which needs regular grooming to help it look as fluffy as it should.

A Volpino is renowned for being healthy but does have a predisposition for developing lens luxation, or dislocation of the lens in the eye. When the zonal chords break, the lens moves and puts pressure in the eye, causing extreme pain.

A celebrated Sentinel, a Volpino will make an excellent watchdog for your apartment. It is also highly trainable, and you will find no issue housebreaking it.

Is your apartment like a comfortable igloo? The American Eskimo Dog may be just the Spitz for you. 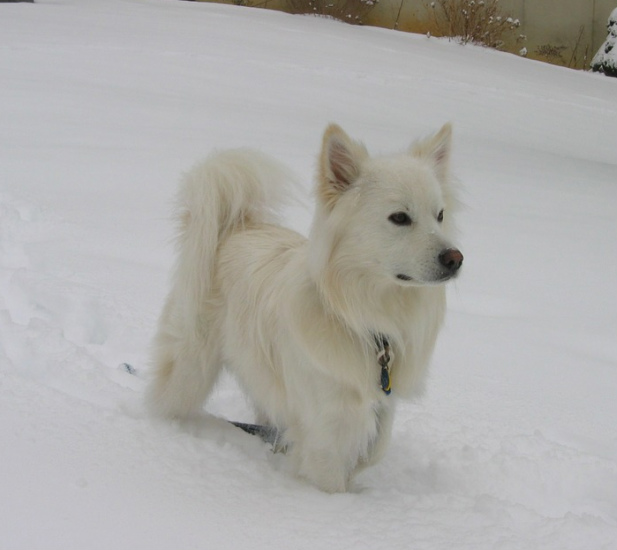 This breed is not American, but German. Breeders called it the German Spitz before World War 2 but renamed it the American Eskimo Dog. It gained fame in the United States when European Immigrants brought their Spitzes with them to America.

Like many Spitz breeds, the American Eskimo Dog has a double, white coat that needs constant combing. It has pointed ears and a sharp nose like many other Spitzes.

This dog is prone to obesity, so do not give it too many treats. It is prone to developing progressive retinal atrophy or degeneration of the retina. Other conditions include a dislocated knee cap (Patella Luxation). Hip dysplasia, or dislocation, is not unknown either. When well taken care of, it is a healthy dog.

Like other Spitz types, this dog is gentle, loyal and affectionate. It gets along with children, owing to its sensitivity and intelligence. This dog’s high trainability and watchfulness make it a suitable apartment dog.

This terrier does not just thrive along county borders. It may do well in your apartment too. 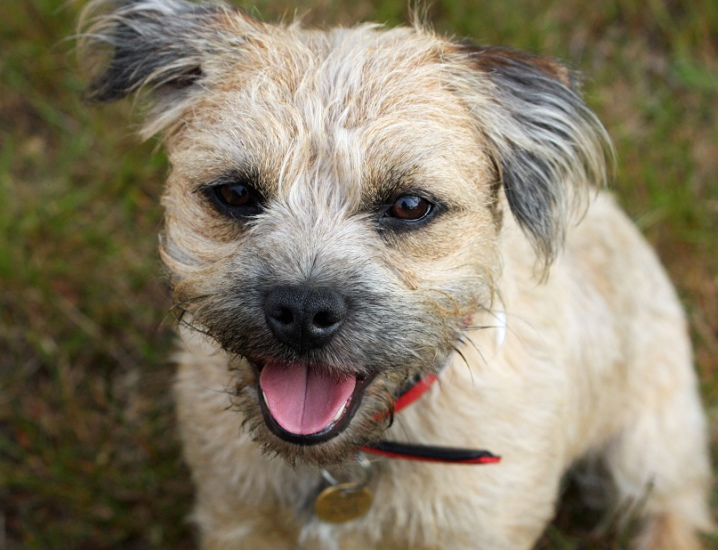 The Border Terrier, once known as the Coquetdale Terrier, got its name because of its long involvement with border hunting. Owners used it to track small game and badgers. It gained recognition by the American Kennel Club in 1920.

A Border Terrier has an otter-shaped head, a broad skull, and V-shaped ears. It has a strong jaw. Its hairs may be grizzle and tan, brown and blue, red and tan or wheat.

This dog is resilient, but there it may have genetic problems. It may develop hip dysplasia, cataracts or heart defects. Older dogs are prone to seizures. Experts estimate its lifespan at 14 years.

This dog may have a strong will but is a friendly, responsive fellow. It does well in children and is eager to please. That said, do not expect it to come the instant you call. It requires obedience training.

Everything said, its small size and sensible temperament will allow it to adapt to your apartment.

The Russian Toy Terrier comes knocking. This little fellow is so small that you may not notice that it is underfoot.

The Russian Toy has survived extinction twice. The rise of Russian communism in the 1920s exterminated it, owing to its aristocratic links. With the fall of the Iron Curtain in the 1990s, it disappeared again. Owners used it to bait rats. Breeders compare it to the Chihuahua, a similar sized dog.

Here is a funny singing Russian Toy Terrier in Action! –

This dog can proudly proclaim that it is one of the smallest dogs in the world. It can have either a long or smooth coat. Both varieties can have soft or long-coated puppies. Their coat hairs are in tan and black, tan and blue, tan and brown and red.

Russian Toys tend to retain their puppy teeth, and you need a vet’s help to extract them. Like other light, small dogs, it may suffer from a dislocated kneecap as well.

This fellow is a joy to have in your apartment. It is jovial and full of cheer. When necessary, it will rise to the occasion and protect you.

The Australian Terrier wishes you a hearty “g’day, mate!” This terrier-type dog is an Australian breed and descends from British terriers like the Cairn, Skye, and Dandie Dinmont. 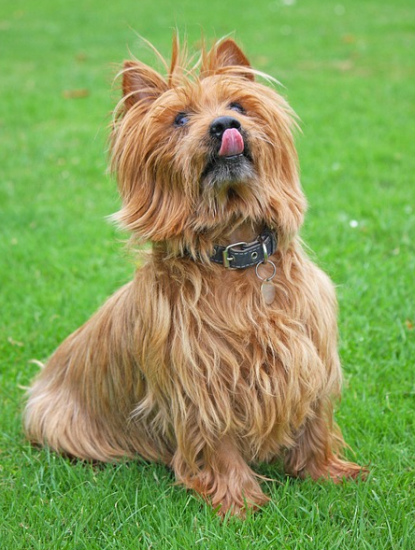 Here is a video on Australian Terrier Grooming:

This small dog has short legs. It has a harsh, red double coat, a ruff around its neck, and a docked tail.

An Australian Terrier is prone to suffer from endocrine issues and luxating patellas. Older dogs may develop cataracts.

Like other terriers, this fellow is spirited and highly alert. It is bossy and may become aggressive around other dogs. Intelligent, it ranks at #34 on Stanley Cohen’s The Intelligence of Dogs.

Apart from its small size, its high trainability makes it perfect for an apartment.

Meet a native of the Highlands, the Scottish or Aberdeen terrier. It was part of the Skye Terrier group. 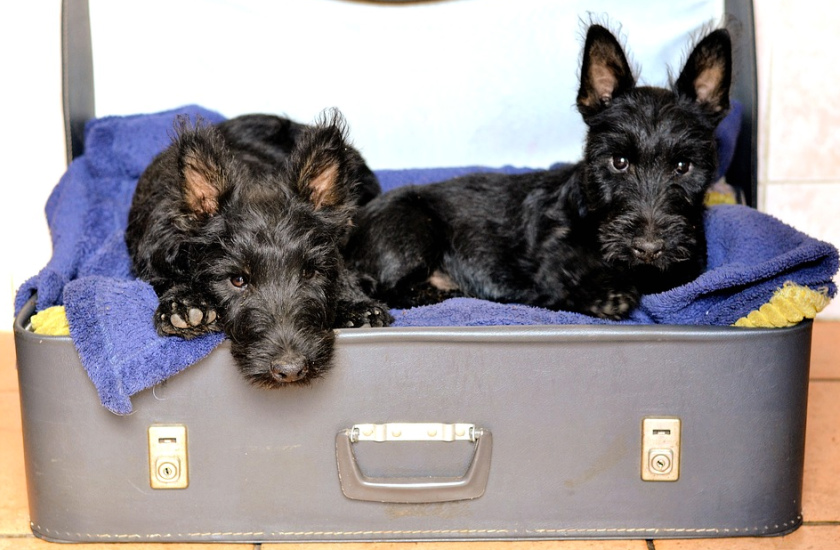 Along with the Dandie Dinmont, Cairn, Skye and West Highland White terriers, the Scottie originated in Scotland. It is most closely related to the Westie, as both their ancestors came from Perthshire. It was a favored dog among the Scottish nobility. Queen Victoria owned a Scottie.

Watch one of the Cutest Videos on Scottish Terriers below:

The Scottie may be prone to what is known as the Scottie cramp. It happens when there is a defect in the neural pathways that control contractions. The dog will arch its back and flex its legs too much. It will push its legs out to its sides and will fall if it rushes about too much. Further, it may develop the Scotty Jaw, or craniomandibular osteopathy, when there is too much bone growth in the lower jaw.

This fellow is a Scottish blueblood and is as feisty as they come. It is self-confident, playful and intelligent. Like a true Scot, it has a diehard, determined nature.

This dog’s small build and quietness make it adaptable to apartment life.

The Tibet Spaniel at this moment commands you to open your front door. This assertive fellow comes from the mountains of Tibet. 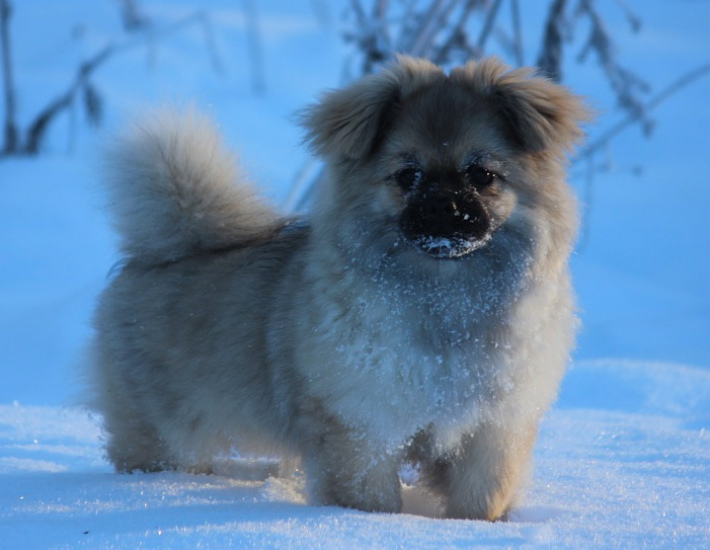 It was a sentinel for Tibetan monasteries and followed its Lama masters around. Owning one was a mark of prestige since it resembled a guardian lion. Experts feel that it may share common ancestry with the Pekingese and Japanese Chin. Breeders began developing it in the United Kingdom in the 1890s.

This regal dog has a domed head and a short, wrinkle-free muzzle. It has a black nose. The dog’s multicolored long coat may be a mix of red, fawn white, cream or black hairs.

The Tibetan Spaniel may develop Progressive Retinal Atrophy or a deterioration of the retina. Some dogs may have a Portosystemic Shunt, which channels blood away from the liver. Blood is, therefore, not cleansed. It may cause weight loss and depression.

This dog behaves like a cat. It climbs everywhere so that it will find a space in your apartment for itself. It is affectionate and will greet you heartily.

Despite what you may believe, there is space in your apartment for a little dog. A dog belonging to any of these 50 breeds makes an excellent flatmate.